As the financial markets have evolved, sovereign wealth funds have had to balance the application of financial theory with the complexities presented by real world circumstances. We conducted a survey of ten IFSWF members to gain insight as to the specific challenges faced by sovereign wealth funds, how their approaches, organisations, and fund allocations have adapted to changing markets, and how they are positioning themselves for the future.

The survey focused on current asset allocations, the evolution of those allocations, private-market investments, and how fund organisations have evolved to facilitate change. The surveyed funds were broadly distributed across the world and represented a variety of fund types. Despite the wide range of different investment objectives and disparate geographic locations of these funds, the results provide insight into how sovereign wealth funds have evolved. In the interest of protecting each fund’s anonymity, responses are not attributed to any specific SWFs or their investment teams.

We asked the sovereign wealth funds participating in the survey about which asset classes they currently held and how they were distributed across markets. While the diverse nature of the sovereign wealth funds surveyed limits the drawing of firm conclusions about specific allocations, the responses are indicative of their general asset preferences.

As shown below, the sovereign wealth funds in the survey group primarily allocate to traditional investment categories (listed equities, government and corporate bonds) and are more heavily weighted to fixed income than stocks. Allocations to infrastructure or real estate and hedge funds are comparatively much smaller. 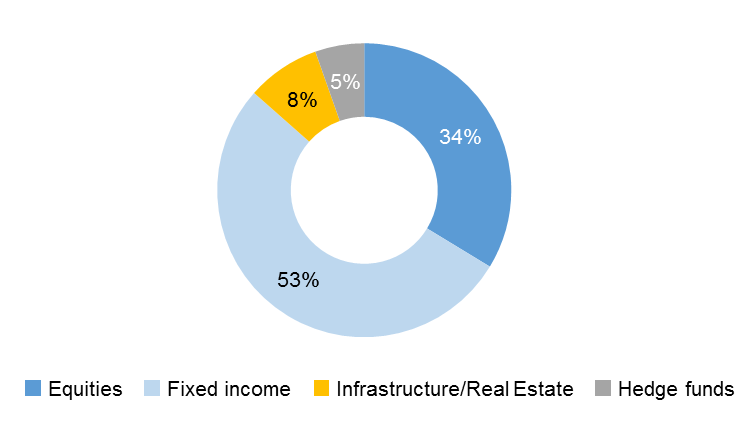 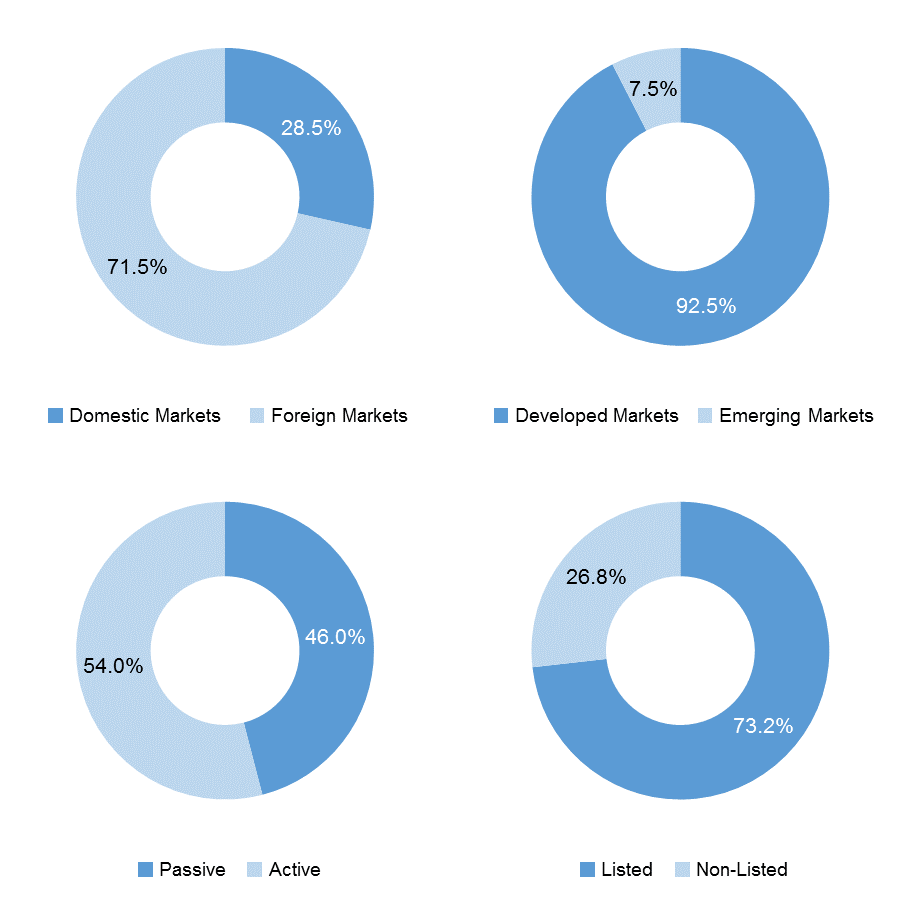 The survey also delved into the distribution of sovereign wealth funds’ allocations to specific asset classes across geographic regions. As illustrated below, most funds invest in listed equity globally (notable values are highlighted in orange). North America received the largest proportion of sovereign wealth fund allocations, followed by Europe and then Asia. Indeed, survey responses confirmed that the US, the UK, and Japan were the three preferred countries for investment, which reflects the fact that these three countries are the largest markets measured by market capitalisation, according to Bank of America Merrill Lynch’s Transforming World Atlas: Investment Themes Illustrated by Maps. Only a small percentage of funds have allocations within the Middle East and North Africa (MENA). It is notable that European listed equities are the only assets common to all funds.

The survey also suggests that sovereign wealth funds are flexible in that they invest both directly and through asset managers. SWFs were more likely to only have direct investments in traditional asset classes.

The evolution of members' asset allocations

We asked sovereign wealth funds how they have been altering their allocation over the recent past (3-5 years) and how they anticipate changing their portfolios in the future.

Exhibit 16 presents the percentage of funds with specific changes in allocations across broad asset classes in both domestic and foreign markets over the recent past. The only notable changes to asset allocation in domestic markets has been increasing private equity allocations. But, overall, there was little consensus, particularly as several of the funds did not invest at home.

Exhibit 4: Members' asset allocation changes in the recent past (3-5 years)

As illustrated in Exhibit 5, in the last three to five years, 30 per cent of the sovereign wealth funds we surveyed have increased their allocations to infrastructure and real estate as well as hedge funds and other alternative assets. Similarly, half the funds surveyed had grown their emerging-market portfolios. Unlisted assets were also a focus for funds. The greatest agreement in decreases came in the listed assets and developed market segments.

Although the surveyed funds have recently shifted their portfolio allocations, many do not expect to adjust them further. A small percentage of funds will continue playing out current trends, increasing their allocations to infrastructure and real estate, unlisted assets, and emerging market assets. The limited proportion of funds indicating future changes in the survey could result from the current market uncertainty.

Exhibit 6 ranks the biggest challenges to investing in private markets sovereign funds identified, along with what they believe to be the keys to successfully investing those markets. Interestingly, fees and insufficient in-house resources rank below concerns about lack of transparency and illiquidity. This is consistent with the ranking of the keys to success where investment and operational due diligence along with institutional relationships and manager alignment are ranked highest. These are portfolio managers’ main methods for decreasing private market opacity and developing better understanding of risks, such as illiquidity, that transcend those implied by measures of volatility.

How are sovereign wealth funds adapting and organising themselves to manage change and the expansion into new asset classes?

The survey first explored the organisational solutions implemented to access the human and intellectual resources needed to manage new asset classes. Respondents were asked to indicate whether they have implemented the full in-house management of new asset classes, worked through partnerships to manage assets, or outsourced the management of assets to an external manager.

Sovereign wealth funds appear to be comfortable outsourcing asset management when they added traditional investments such as listed equities and fixed income. But for unlisted investments, the funds generally preferred to develop new internal capabilities and, to a lesser extent, collaborating with an external resource. This preference suggests that sovereign wealth funds view the management of traditional assets as a commodity and the management of private or alternative assets as an area that requires specialised resources and competencies. It appears that because the additional resources required to invest in private assets are primarily intended to address issues with transparency and risk management, sovereign wealth funds prefer having an active role in gathering and sharing insights to inform asset management decisions. This coincides with interest from IFSWF members in how to build out the human and intellectual resources within their organisations to manage private assets.

How have sovereign wealth funds adapted their organisations to expand into new asset classes? By a wide margin, sovereign wealth funds preferred to add new resources to existing teams, rather than establish entirely new departments. Establishing new business divisions was indicated twice for private assets and once for listed equities. Only a small number of respondents indicated that no new resources were required.

The final area of focus for the survey was to understand SWF perceptions of the most relevant competencies required in expanding to new asset classes. An overarching theme across the responses provided by sovereign wealth funds– outside of the obvious need for analytical aptitude and commercial acumen – was the importance of being able to build and maintain relationships. This ability was crucial regardless of whether sovereign funds were building internal capacity through cooperation with outside resources, establishing relationships with consultants/advisors, or establishing communication channels with external managers. This trend has important implications for identifying external investment resources, for hiring investment talent, and for establishing and maintaining a collaborative culture within investment teams.