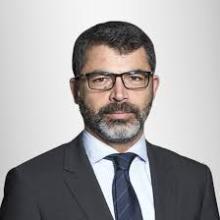 Mr Amrane has been appointed by His Majesty King Mohammed VI as Chief Executive Officer of Ithmar Capital in February 2019.

Prior to this appointment, Mr Amrane was Deputy CEO of the Moroccan Agency for Sustainable Energy (MASEN). He was a member of the Executive Board since its creation in 2010.

His previous experience in the economic and financial areas, as well as his engineering capabilities, allowed him to oversee all the procedures and operations within MASEN, from development to legal engineering, partnerships and financing.

From 2006 to 2010, Mr Amrane was the Managing Director of the Moroccan subsidiary of the BPCE Group to develop the activities of the French banking group in the banking and real estate sectors in Morocco. Prior to that, Mr Amrane held various positions in the Moroccan Ministry of Economy and Finance. He was a Public Finance Inspector, Head of the Debt Restructuring Service at the Treasury Division, and then Head of Credit within the same division.

Mr Amrane holds a dual degree in engineering, from Hassan II Institute of Agronomy, and Finance, from the General Inspectorate of Finances and the Association of Investment Management & Research (certification).