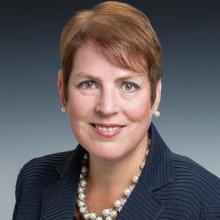 Angela M. Rodell serves as the Chief Executive Officer of the Alaska Permanent Fund Corporation, having been selected in October of 2015 by the Corporation’s Board of Trustees. As the CEO, Ms Rodell is leading the Corporation at a pivotal time in history as it continues to emerge as a revenue generating centre for the State of Alaska.

Angela also served on APFC’s Board of Trustees as a cabinet member, having been appointed Commissioner of the Department of Revenue in August 2013 by Governor Sean Parnell. In addition to serving as a Trustee, Commissioner Rodell enjoyed the oversight role in working with the divisions and 900 employees within Revenue, and participated as a member of several boards, including the Alaska Retirement Management Board, the Alaska Housing Finance Corporation Board, the Alaska State Bond Committee and the Alaska Industrial Development and Export Authority, among others.

Ms Rodell has a Bachelor of Arts degree from Marquette University in Milwaukee, Wisconsin and a Masters in Public Administration from the University of Kentucky in Lexington, Kentucky.